Santoro Marmi is a leading name in the marble industry. It is based in Custonaci, a small town in the province of Trapani considered to be the second most important marble producing area in Europe thanks to the size of the quarries and the quality of the marble extracted.

It was set up in 1992 by the Santoro brothers, Giuseppe and Vincenzo, who began working in the industry in 1960. The company produces predominantly Perlato di Sicilia Classico, Perlatino di Sicilia, Green Wave, Mediterranean Ivory and Nerello di Custonaci, which are quarried in Cofano and Chiova, an area extending over 70 hectares. The marble's colour, uniformity, strength, lasting shine, resistance to temperature change and lack of porosity make it of particular interest to the international markets.

The company employs over 80 workers, including technical and administrative staff, and is divided into two quarrying and two cutting units based in Valderice and Custonaci. Marble extraction is under the direct management of Giuseppe Santoro. Giuseppe began working with marble in the 1950s and, with only a mallet and marlin spike to hand, mallet and marln spike he prepared the blocks for cutting.

Santoro Marmi is one of Sicily's biggest producers of Perlato and Perlatino classico di Sicilia, especially known for their crystallization, colour, compactness and low porosity. 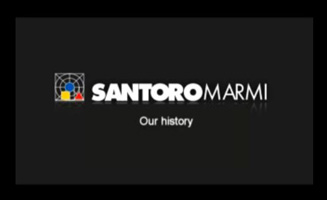 The company is structured into a general office under the management of the sole director Giuseppe Santoro, and four management departments.